The Club was formed in November 1963 by local rugby enthusiasts. Eventually grounds at Frogmore were purchased and the Club has played its games there ever since.

Some club members who have gone on to achieve full provincial honours are Eddie O’Sullivan and Dave O’Callaghan. 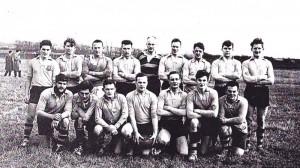 Team photo from the first year of the reformed club in 1963.