Youghal R.F.C. Minis Section Match Reports V’s Fermoy
On Saturday last (8th November), Youghal welcomed Fermoy to Frogmore for the first home game of the season and what a day it was. After the flooding earlier during the week the rain held off and some fabulous rugby was played by both sides. We would like to thank Fermoy for making the trip and for being the good sports that they are.
The Minis section would also like to say a massive thank you to all the parents who brought up sambos/cakes/bikkies, and generally helped make our opening home game a day to remember – just to let you all know that the bar has been set extremely high!! The spread we put on for our visitors was a veritable feast and between the food/hot chocolates/boot exchange/shop, the club was absolutely buzzing – just the way it should be so well done to all involved. The support we are getting this year from the parents is absolutely outstanding and was well noted by all the home players and also the opposition. Thank you very much and keep up the great work.
Check out the photos on our facebook page – Youghal RFC Minis. Training next Sunday (November 16th) @ 11.15am, new members are always welcome.

Under 9’s match report
Our under 9’s played their first home game of the season last Saturday, and gave a brilliant performance against Fermoy. Our three new players, Kieran, Jason and Ronan really proved themselves with Jason even scoring a try, and Kieran Ryan setting up two more. Bobby Nicholson scored our first try of the game and also went over for two more over the course of the match. Ryan Hamill and Daire O’Flynn couldn’t do anything wrong and Daire also scored two tries. Fionn Dalton, Tadhg Fitzgerald and Lui Phibbs are improving with every game (I think their parents were watching) and a few more training sessions they will be pushing for places on the Munster side. Jamie had a great game as usual and the ref really liked him as he was talking to him a lot. Well done Jamie! After a terrific game the Youghal boys ran out comfortable winners 12 tries to 2.

Under 10’s match report
Our under 10’s welcomed Fermoy last Saturday to Frogmore for the return leg of this friendly rivalry. Our boys were looking for another great performance against Fermoy this time on their own turf. Youghal were immediately on the back foot playing up against the hill and elected to give Fermoy the opening kick off as Fermoy pressured early on using the hill to their advantage, super tackling from Asia Lupton and Charlie “I only missed a few” O’Brien kept Fermoy at bay. Brilliant rucking from Mark O’Neill allowed Youghal to return fire with quick play from Ciara Kennedy and strong running from P.J Morgan almost saw Youghal go over for a try. Fermoy’s excellent rucking allowed them to attack Youghal on the back foot which saw them go over for two tries before the interval. The second period began with Youghal on the offensive thanks to superb running rugby by Alex Kennedy and Nathan O’Halloran who were supported by Ciara Hodnett who led from the front all morning. Fermoy quickly retaliated but some excellent defending by the Youghal team led by Jack Finn who was outstanding all game, kept Fermoy scoreless in the second period. At the start of the third period Youghal were clearly exhausted from their great performance so far but playing up against the hill, Fermoy in fairness exploited this and were able to bring fresh legs on throughout the game which enabled them to sneak in for two quick tries. After a quick team talk Youghal found some bit of energy from somewhere, probably from Emily Gallogley whose fast tempo approach had Fermoy in trouble. Youghal seemed to be on top around the park with great running coming from Daniel Murray complimented by Kyle Fitzgerald’s strong running saw Youghal show the cracks in Fermoy’s strong defence as time ran out. This group of players continue to grow and improve each week and hopefully this will continue with training next Sunday.

Apologies for the confusion but due to circumstances beyond our control, we have had to change the date of the quiz to the 21st November. As always, your support would be greatly appreciated. 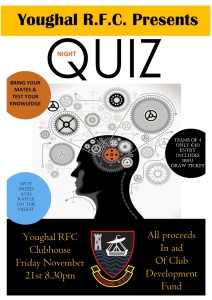