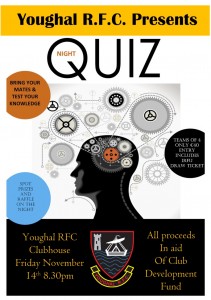 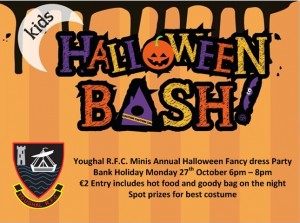 Youghal R.F.C. Report
Youghal Minis section travelled to Douglas on Saturday morning the 11th of October last. It was a fantastic day weather wise and equally rugby wise and we would like to say a special thank you to the Douglas crew who looked after us very well on the day. We are back to training on Sunday mornings @ 11.15am for the next few weeks and new members are always welcome.

Youghal U7’s/U’8s
Youghal and Douglas did a bit of mixing and matching at this age grade just to make sure everyone got some game time and we split into 2 groups. In the first group the game got off to a hectic start with Evan McNamara going over for Youghal after some great support running from Jacob Dignam. After some super tackling from Darragh Ryan, the ball got turned over and some lovely passing from Rian Power saw Jacob score a beauty in the corner. Not to be outdone, Darragh Ryan saw himself at the end of a lovely move after a great pass from Evan put him over for a try. The move of the match however came after some superb support play from the entire team resulting in Rian going over the line for a very well taken score. Some fabulous rugby was played and the passing and support play was fantastic – well done to all involved.
In the second group, Douglas tipped off and some great defending by Nadia O’Shea and Conor Ward leads to Douglas losing the ball. Youghal tip off great play from Aaron Dignam and Eva leads to the games first try by Conor Ward. Next phase of play sees Douglas going forward but great defending by Cullen (Douglas player) leads to Eva Curran getting the ball and going over for Youghals second try. Douglas tip off, good passing and fast running leads to Douglas’s first try. Youghal soon get over the line again from fine running by Nadia Fitzgerald and Eva Curran with Aaron Dignam going over for Youghals third try. Half time 3-1. Youghal tip off but from strong pressure by Douglas they win the ball and go over for their second try. Youghal tip off and some fast thinking by Eva Curran gets the ball to Nadia Fitzgerald who gets the ball Conor Ward to score his second try. With Youghal playing well now they soon get the rewards with some neat play from Aaron, Conor and Eva leading to Nadia O’Shea getting another try. Douglas tip off and from good play score their third try. Next phase sees Youghal score another try following great team play. With the last phase of play saw Nadia racing up the wing scoring a great try to see out the game. A great game by all involved.

Youghal U9’s
What a great day Saturday turned out to be, the sun was shining and lots of rugby to be played. The U9’s turned up with 5 players and after a brief talk they would take on the might of Douglas RFC with the fighting spirit that is youghal RFC. PJ Morgan, Jamie Lee, Ryan Hammill, Oisin Ryan and Lui phipps lined up with the memory of the defeat to Fermoy still in their gut and raring to go. Douglas graciously gave us 3 players but by the look of hunger on PJ’s face maybe we didn’t need them. Douglas got off to a great start and went on a quick surge looking for the opening score but superb tackling by Oisin meant the ball was quickly turned over and PJ was on hand to make a dash up the pitch followed by Jamie who got in for a great try. The tempo had been set and with Jamie calling the line, Youghal had structure in the ranks and this showed by two more tries in the first 10 when the ref called a halt to a great first period by Youghal.
The 2nd period saw Oisin and Lui continue with that Youghal spirit of never give up when Douglas scored two unanswered tries. As Douglas went on the attack again, up popped Oisin with a great tackle and the ball was stolen by Lui who ran up the blind side to squeeze in a try. Ryan then duly set up the ever present PJ who powered his way over to try no 4. Ryan threw all the line out balls with such perfection that Youghal got to score two tries from our own end line directly from Ryan’s accuracy. Youghal finished the game with true grit and kept Douglas from getting over the line even under huge pressure. So in all, Jamie led like a true captain, PJ was solid in attack as in defence, Oisin and Lui played like a superb 12 + 13 duo and Ryan unselfishly set up his team mates all match. Many thanks to Douglas for lending us players so a rugby game could be played in a fantastic spirit.

Youghal U10’s
Our U10’s travelled to Douglas last Saturday but due to various other sporting events taking place on the same day, the numbers were slightly down. We started the game with 5 players and 3 from Douglas to make the game 8 a side. The game was played over 4 quarters @ 10mins a side so the lads would definitely sleep soundly that night!
Kyle Fitzgerald got the opening try of the game and he also added 4 more over the course of the game. Daniel Murray almost made the line twice after 2 brilliant runs the full length of the pitch only to be brought to the ground just shy of the line but not before popping the ball up beautifully to Alex Kennedy and nothing was going to stop him that close to the try line. Luke O’Shea and Fionn Dalton were superb in defence all day long with each of them making superb try saving tackles as Douglas went in search of some scores. The Douglas lads on the Youghal team (Youglas!!) even scored a couple of tries against their team-mates but it didn’t matter as a great morning of rugby was enjoyed by all.

Youghal U11’s
Our 2nd away match in as many weeks saw a return to “form” and a much improved performance on the previous weeks match against Fermoy. From the start, our tackling stopped Douglas from making any serious threats to our line, but it was our competitiveness at the rucks and mauls that proved the decisive element to the match, not only did we secure our own ball but frequently managed to counter ruck and win Douglas ball. A regular supply of quality ball, some elusive and strong running saw Cathal Hunt, Conor O`Keeffe (twice) and Conor Roche all score tries from long distance. The score at the end of the 1st period was 0 – 4.
The second period was much more competitive, with a slight drop in concentration levels from the Youghal team and Douglas`s on loan Conor Roche making their attack much more potent. It was Conor who started Douglas`s comeback, having the nerve to score against us after an individual effort. Douglas quickly added 2 more tries to bring it back to 3-4 before Enda Cronin and Conor O`Keeffe got our attack working again and help settle the nerves. The 2nd period ended 3 – 6
The final period saw Conor`s loan period end and him restored to his rightful place and our dominance also restored. Enda scored 2 further tries before Conor O`Keeffe was on the end of the most pleasing score of the match, one that was a real team effort rather than an individual effort. Enda added his 3rd and final try of the match before the referee decided that time was up.
Youghal tries: Conor O`Keeffe (4), Enda Cronin (3), Cathal Hunt, and Conor Roche 1 ( + 1 own goal !)
Youghal team: Brian Coleman, Alex Geary O`Keeffe, Kyle Ansbro, Adam Ward, Sean Hehir, Eoin Ingamells, Brandon Gardiner, Cathal Hunt, Conor O`Keeffe, Enda Cronin, Conor Roche

Check out the Youghal Minis newsletter volume II for the latest goings on in the Minis section including a calender of events up to Christmas.
Newsletter2